Where did $50 million in pandemic education relief money in Idaho go?

State paid over $2.6 million in administrative fees to ClassWallet, the vendor of software that Idaho hired to run its Strong Families, Strong Students Program

Parents have largely been appreciative of the state’s Strong Families, Strong Students Program’s grants, which helped them buy new computers and other hardware, cover internet costs, and even pay for private tutoring and day care. But the program was also costly, with over $2.6 million going to administrative fees to the vendor of the software that Idaho hired to run the program, ClassWallet, which won the no-bid contract with the backing of a lobbying firm run by the then-Idaho Republican Party chairman. (Getty Images)

In 2020, Idaho found itself with $1.25 billion in federal funding to spend on coronavirus relief.

Of that money, $50 million went to a program providing families with education spending grants. To get the money in those families’ hands, Idaho awarded a lucrative no-bid contract to a company represented by longtime Idaho Republican Tom Luna.

Parents have largely been appreciative of the grants, which helped them buy new computers and other hardware, cover internet costs, and even pay for private tutoring and day care.

But the program was also costly, with over $2.6 million going to administrative fees to the vendor of the software that Idaho hired to run the program, ClassWallet, which won the no-bid contract with the backing of a lobbying firm run by the then-Idaho Republican Party chairman. Some of the parents also found that purchases they made through the site were more expensive than just buying the products themselves directly from vendors. And questions still remain about how $7 million of those funds were spent.

The contract awarded by the Idaho State Board of Education

Federal money from the CARES Act was meant to support students from kindergarten through college as the pandemic shut down schools and forced a transition to online, home-based learning. Many families were left to balance their children’s education on top of full-time jobs.

In an executive order signed in October 2020, Gov. Brad Little put $50 million toward a newly created initiative, the “Strong Families, Strong Students” program, which allowed Idaho families earning under $75,000 a year to receive grants of $1,500 per eligible student, with a maximum award of $3,500 per family. Families could use the money to purchase computers, educational materials, day care or tutoring services.

To distribute the funds, the Idaho State Board of Education awarded a no-bid contract to ClassWallet, which was already managing similar programs in Oklahoma and Arizona.

ClassWallet was represented by lobbying firm Strategos Group, where Luna — the former Idaho superintendent of public instruction and then-chairman of the Idaho Republican Party — is a partner.

In 2012, he awarded a $180 million contract to lease laptops from Hewlett Packard and provide them to Idaho high school students. (In a referendum against what became known as the Luna laws, voters reversed the decision.) In 2013, he awarded a 5-year, $2 million contract to Education Networks of America. The company had previously donated to Luna, and the company’s Idaho customer service director had once worked for Luna.

After he negotiated the ClassWallet deal, Luna also continued to work with the company. He appeared as a panelist on ClassWallet webinars in August 2021 and March 2022.

Typically, a contract that large would go through the competitive bidding process required under Idaho law. But the Board of Education had gotten the OK from the Idaho Division of Purchasing to bypass that requirement.

“Our understanding is that the vendor was chosen based on its experience successfully running similar programs in other states and that Tom Luna’s affiliation with the vendor had no bearing on the decision to select the company,” a spokeswoman for the governor told the AP at the time.

For the contract, ClassWallet earned a $250,000 set-up fee, plus $53 per each application it processed, for a total of $2.1 million. ClassWallet also earned $15 each time parents asked for a reimbursement of funds they’d already spent ($276,975). The contract also contained a 2.5% transaction fee paid by vendors to ClassWallet, about $1.2 million. That resulted in about $3.8 million for ClassWallet total.

What ClassWallet provided was a website through which parents could make their purchases of educational materials from pre-approved vendors.

That allowed ClassWallet to bring in revenue in yet another way. In addition to well-known office suppliers like Staples and Office Depot, the company also gave parents the option to purchase materials sourced by ClassWallet itself. Idaho families ended up purchasing $342,286.82 worth of items from ClassWallet’s in-house vendor.

ClassWallet’s pricing strategy also raises questions about its stewardship of the state’s money. In social media comments, parents complained that the prices they saw on ClassWallet were often higher than buying directly from the vendor.

Some parents suggested going directly through the vendor to make a purchase, and then demanding reimbursement later.

One parent wrote on social media that she was able to order a case of paper more cheaply from Staples’ website than through ClassWallet.

“What a marvelous waste of money,” she commented. “Money that could go toward resources for more people.”

An Idaho Statesman review of a few popular items found that ClassWallet sometimes charged higher rates than at other popular retailers. A printer from Brother, for example, retailing for $119.99 at BestBuy, was on sale for $138.03 at ClassWallet, a markup of 15%. An adjustable white board retailing for $122.14 at Target went for $263.89 on ClassWallet’s website, over double the price.

ClassWallet says that prices are set by the vendors that use the platform.

“The prices that integrated third-party e-commerce vendors offer through the platform are determined exclusively by the vendors and are outside the scope of ClassWallet’s relationship with the vendors,” wrote ClassWallet president Neil Steinhardt in a statement to the Capital Sun. “ClassWallet simply serves as the platform in which the marketplace of vendors is made available to users.”

“When pricing matters are brought to its attention, ClassWallet consults with the vendor to better align pricing and deliver the most value to users and clients,” he wrote.

ClassWallet’s business is booming. Beyond Idaho, ClassWallet was also chosen to distribute funds to students in Indiana, Georgia and Michigan. In the last three years, its revenue has grown by 916%, it announced in August.

That announcement came just as ClassWallet is pushing back against scrutiny for how it has managed grant funds. Oklahoma filed a lawsuit against the company after a federal audit found more that families had spent money on questionable purchases — like Christmas trees, a Lay-Z Boy recliner and gaming consoles — amounting to $650,000 that the state must now pay back. ClassWallet also secured its contract in Oklahoma through a no-bid contract.

Where Idaho parents spent the money

Data provided to the Capital Sun by the State Board of Education doesn’t list what specific items families were able to purchase with the money for the Strong Families, Strong Grants programs. But it does show where families spent money and the category the spending fell into. Purchases made between April 29, 2021, and Sept. 7, 2021, totaling $7 million were not categorized, and did not include any vendor information.

A small set of companies ended up the biggest beneficiaries of parents’ spending. Parents spent $11.4 million of the grant money at Staples and $10.8 million at Office Depot. Carson Dellosa Education, a teaching supply company, earned $1.7 million and Apple also got $1.9 million.

The data provided no information on where $7.5 million in purchases went that were categorized as “reimbursements.”

Parents spent the most on computer hardware and adaptive learning technology — at least $16.7 million. In comments on the Idaho State Board of Education’s Facebook page, many parents say that they used the funds to buy laptops, desktop iMacs and monitors.

At least $5.6 million was spent on educational supplies and materials. Another $2.6 million went to internet connectivity.

Stewards of the education funds

Many parents have expressed gratitude for the Strong Families, Strong Students grants, saying that it helped them to pay for education expenses that they needed to homeschool their kids during the pandemic.

Still, the money went to just a portion of Idaho families in need.

All in all, the state of Idaho spent about $224 million of its federal CARES Act funds on education programming. The $50 million Idaho spent on the Strong Families, Strong Students grants went to 18,465 families making fewer than $75,000 per year, touching 24,563 students, at an average program spend of about $2,035 per student. 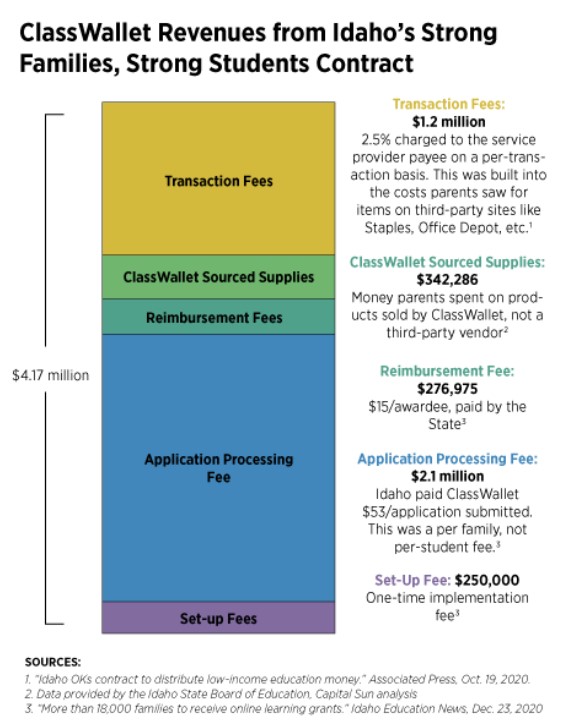 But Idaho’s public school system comprises over 310,000 students, of which 27.3% — or about 84,000 students — are eligible for a free or reduced school lunch. The amount of federal CARES Act funding going to support public schools was $107.8 million, plus another $24.8 for school technology. That’s spending of about $428 per student.

In a statement to the Capital Sun, the governor’s office expressed its continued support for individual grants for families.

“Governor Little is a steadfast believer that parents and families should always be in the driver’s seat of their child’s education,” wrote the governor’s press secretary Madison Hardy. “The Strong Students, Strong Families program gave that opportunity to thousands of Idaho families trying to support their students’ learning needs following the onset of COVID-19.”

“Not only did the program remove barriers for low-income families to buy their children additional educational resources, but it also helped to minimize the effects of pandemic-related learning loss,” Hardy wrote.

This year, Idaho will implement the Empowering Parents grants program, which effectively extends the Strong Families, Strong Students program with another $50 million from the American Rescue Plan Act State Fiscal Recovery Funds. About $1.2 million in state money will be used to administer the grants.

The plan, passed earlier this year, received popular support from the Legislature, receiving support from all but one senator, Mark Nye, D-Pocatello,, and one representative, Rep. Karey Hanks, R-St. Anthony.

“We know that there are thousands of students throughout our state who experienced learning loss as a result of the pandemic disruption,” Board President Kurt Liebich said in a press release announcing the opening of the grants application. “The SFSS program made a real difference during the pandemic and we expect the Empowering Parents program will continue to provide needed resources to help address learning loss and get our students back on track.”

ClassWallet was not chosen to administer grants this coming year for the Empowering Parents program — instead, it will be Primary Class, Inc., a company incorporated in Delaware in December 2021.

Where did $50 million in pandemic education relief money in Idaho go?

Kate Talerico is a freelance reporter. She was previously a reporter at the Idaho Statesman covering growth, development and local politics. She has also reported for BuzzFeed News, the Atlantic and Mansion Global, and she is interested in stories with a focus on urban policy and government accountability.