Idaho established a housing trust fund in ‘92, but it was never funded. What happened?

Headlines about housing from 1992 editions of the Idaho Statesman feel eerily familiar.

Growth puts squeeze on number of available rentals in area

That year, Cecil Andrus — Idaho’s most recent Democratic governor — enjoyed a near-even split of Democrats and Republicans in the Senate chamber of the Legislature, a ratio that has never happened since.

“The Democrats at the time represented growing communities around the state, including urban areas, and were pushing for some housing support, particularly for low-income areas, to build out affordable housing,” said Mat Erpelding, who represented Boise in the Idaho House from 2012 to 2019. “Idaho was experiencing a similar burst of growth in the early ‘90s, and housing was a struggle.”

With negotiating power in the Senate, legislators proposed the creation of the Idaho Housing Trust Fund, which would act as a source of matching funds for federal affordable housing programs. Many states were creating housing trust funds during the 1980s and ‘90s, including Arizona, California, Washington, Utah and Oregon.

In Idaho, the fund exists in statute — but it has never received appropriations.

Idaho also isn’t the only example of a state that set up a fund and didn’t attach a revenue source. Alabama, Montana and Rhode Island also have unfunded trusts.

Housing experts lament the lack of support for affordable housing at the state level in Idaho and say more resources would help incentivize more development.

Across Idaho, there is a shortage of rental homes affordable and available to extremely low-income households whose incomes are at or below 30% of area median income (AMI). Many of these households are cost burdened, spending more than half of their income on housing, which makes them more likely than other renters to sacrifice other necessities like healthy food and health care to pay the rent, and to experience unstable housing situations like evictions.

As of 2021, according to the National Low Income Housing Coalition, the shortage of affordable homes in Idaho was more than 22,200.

According to the bill’s statement of purpose when it was proposed, the Idaho Housing and Finance Association, which was then called the Idaho Housing Agency, would serve as the fund’s trustee for the purpose of accepting private and public donations. Funding could be distributed as either grants or loans to local governments and housing authorities, as well as nonprofit organizations. 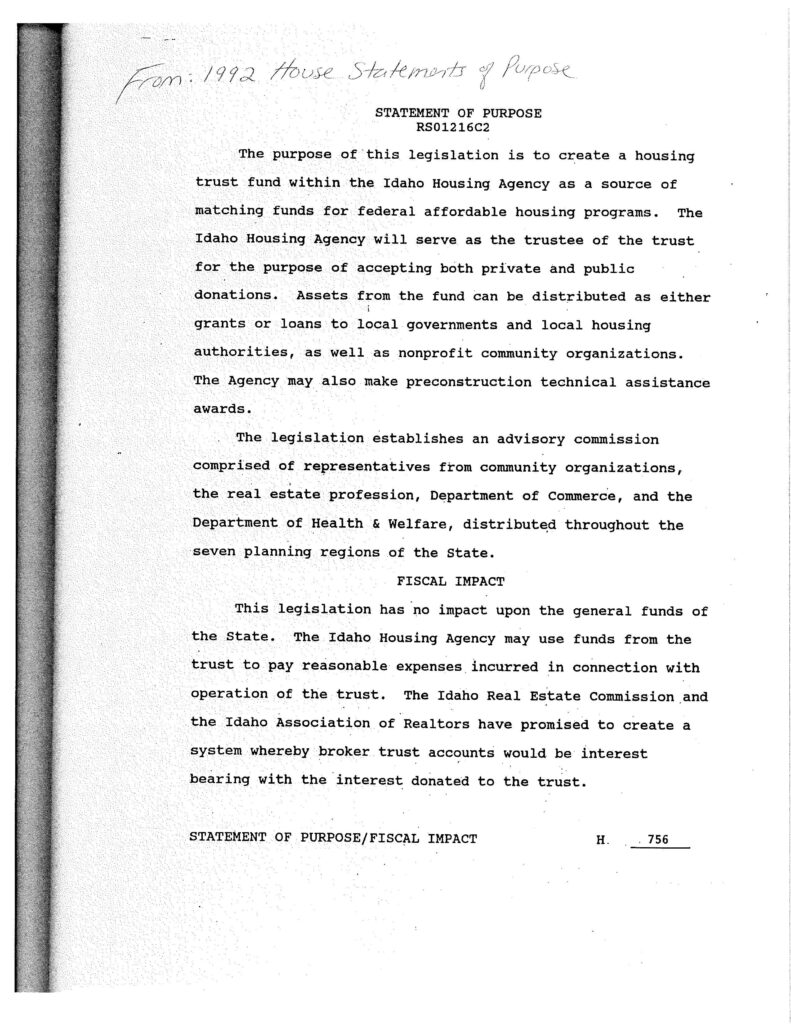 The bill establishing the fund passed the House by a vote of 65-18 and passed the Senate unanimously. It became law on July 1, 1992.

The bill outlined how an advisory commission would be established and consist of seven members appointed by the governor. The members would represent advocacy or community-based organizations, the real estate industry, the Idaho Department of Health and Welfare, the Idaho Department of Commerce and the housing association. If possible, the members were to represent each of the seven planning regions across the state, such as northern Idaho and southeast Idaho. But since a revenue source was never established, the commission was never established, either.

What wasn’t in the bill was a funding mechanism, and it has stayed that way ever since.

GET THE MORNING HEADLINES DELIVERED TO YOUR INBOX

“That was probably the effort that brought it to the attention of different policymakers in Idaho,” Hunter said.

According to the Senate State Affairs Committee meeting minutes from March 10, 1992, Hunter told the committee the initial revenue source would be interest on real estate broker trust accounts, which would be approximately $150,000 per year, but more would be needed to match the $3.5 million in federal funds. Freeman Duncan, who was a Republican representative of Coeur d’Alene at the time, said the proposal had the support of the Idaho Real Estate Commission.

“The effort at the time was to move forward with a fully defined trust fund, which means that there would be a trust fund in structure that would be established along with some kind of funding source that was attached with it,” Hunter said. “At the end of the day, they didn’t have the legislative support to get a particular bill through with a specific funding source, and so there was a thought that maybe they could set up without the funding source, get it on the books in statute, and then in a subsequent session they would be able to find the funding source to go with it.”

In many other states, transactions related to real estate are used to keep a trust fund flowing with revenue. Many use real estate transfer taxes, which are one-time taxes or fees levied by a state or local jurisdiction when a piece of real property is sold. Others use document recording fees, which are charged when a deed, mortgage and other documents are legally recorded. The amounts that go into the fund are typically fairly low — in Illinois, $9 of every $78 recording fee goes to the trust fund, and in Kentucky, it’s half of a $12 recording fee.

The idea of transfer fees has been met with opposition by real estate associations in the past, including the Idaho Association of Realtors. When bills have been proposed in the Idaho Legislature regarding mandatory sales price disclosure, the association has said they oppose the change because it could lead to real estate transfer taxes. The taxes, they argue, create an affordable housing crisis by adding to the cost of real estate.

“It’s argued by some that (real estate is) still a narrow band of activity out there, and if the state is going to try to support affordable housing, it should do so in a more general sort of way as opposed to targeting a specific industry,” Hunter said. “So some folks argue … that this is really a general need in the state, and therefore should be a general appropriation.”

“This tax only adds significant cost to the transaction and zero value to the buyer. In fact, it will price out the most vulnerable prospective homeowners,” Pond said. “IR does not support adding additional financial barriers to homeownership in Idaho.”

Former Rep. Wendy Jaquet, who represented Ketchum from 2002 to 2012, said she introduced a bill in 2006 that would have allowed voters in a county to authorize a local residential real estate transfer tax, but it never made it out of the House Revenue and Taxation Committee.

“Statewide, realtors were totally opposed to it,” Jaquet said. “Some local realtors were for it, but some were actively opposed. … Some felt like their commission would be eroded. They also felt like the seller rather than the buyer would be paying it, and they felt that was unfair as far as representing the seller.”

Arguments over the funding mechanism didn’t resolve in the 1993 session of the Legislature, and when 1994’s general election rolled around, Democrats at the national and local level were trounced by Republicans. Seventeen Democrats in the Idaho Senate shrank to eight, then to four by 1999. Today, there are six.

‘… Probably going to be an uphill battle’

As the years have passed, the idea of new taxes in any regard has become a non-starter in the Idaho Legislature. But other proposals have also gone nowhere.

Sen. Ali Rabe, D-Boise, is the executive director of homelessness prevention organization Jesse Tree, and said she gave a presentation to several legislators and the governor’s office prior to the spring 2021 legislative session outlining how the trust fund could be used to help ease Idaho’s housing problems.

In the memo, Rabe said Idaho could use CARES Act or American Rescue Plan Act relief funds to invest in the Idaho Housing Trust Fund, and the dollars could be distributed to local governments based on a formula.

“I met with quite a few different government officials throughout the state to ask them how they would use the trust fund, and all of them are very enthusiastic about the idea and have lots of ideas about how they would use it,” Rabe said.

But enthusiasm wasn’t the response she got when she presented the ideas to legislators.

“I basically got silence,” Rabe said. “One legislator asked me if it was going to cost more than a million dollars, and I said yes, and there was no interest in that.”

It wasn’t exactly a surprise, but she was frustrated that the idea went nowhere and wasn’t brought up during the session.

“It’s going to be hard for the Legislature to dip their toes into this in the current political climate, because there is a reticence to fund anything right now and solving the housing crisis is not an inexpensive undertaking,” Rabe said. “It’s going to cost money. So getting them to agree to that is probably going to be an uphill battle.”

When asked about the meeting and whether the governor is considering using any of Idaho’s $900 million surplus to support affordable housing, Gov. Brad Little’s press secretary Marissa Morrison Hyer said that is still to be determined.

“The governor’s office is working with many groups and stakeholders to address the issue of affordable housing in Idaho,” Hyer said. “The state is in the budgeting process for fiscal year 2022 right now and will be making determinations based on the most pressing needs of Idahoans.”

Idaho established a housing trust fund in ‘92, but it was never funded. What happened?

Kelcie Moseley-Morris is an award-winning journalist who has covered many topics across Idaho since 2011. She has a bachelor’s degree in journalism from the University of Idaho and a master’s degree in public administration from Boise State University. Moseley-Morris started her journalism career at the Moscow-Pullman Daily News, followed by the Lewiston Tribune and the Idaho Press.