A new park under construction in downtown Boise is being named in honor of former state Sen. Cherie Buckner-Webb, the first Black woman elected to the Idaho Legislature.

“Naming this park for Cherie Buckner-Webb honors this trailblazing Boisean who, while making our community a better place, has inspired and empowered generations of Boiseans,” McLean said in a written statement. “Now everyone who visits this beautiful downtown park will hear her name and have the opportunity to learn about her legacy of service to Boise and the state of Idaho.”

Buckner-Webb served in the Legislature for 10 years, representing District 19, which includes the North End neighborhood and downtown. Buckner-Webb served four terms in the Idaho Senate, from 2012 to 2020. She was a member of the Democrat’s leadership team, serving as assistant minority leader until she left office.

Buckner-Webb previously served one term in the Idaho House of Representatives, from 2010-2012.

The park is being built at the intersection of 11th and Bannock streets downtown as part of a partnership between the city of Boise and the Capital City Development Corporation.

The project’s development budget is $4.3 million, according to the city’s website. The park is slated to include tree-lined green space, public art created by Matthew Mazzotta, public restrooms and places to store bicycles.

The park will be officially dedicated later this summer when construction is complete.

The inspiration for the name came from public comments offered earlier this year. Overall, residents submitted 1,200 name ideas and a group of park stakeholders identified the submission and supported McLean’s decision to name the park for Buckner-Webb.

In addition to her serving in the Legislature, Buckner-Webb worked to create the Idaho Black History Museum in her great-grandfather’s former church, St. Paul Baptist Church, which has been relocated to Julia Davis Park.

“Boise afforded opportunities that were denied elsewhere. For 115 years my family has purposefully and proudly chosen to make Boise our home,” Buckner-Webb said in a written statement. “I am humbled and honored by the naming of this park. It stands as a testament to the foundation of contribution to community laid by my family across generations.” 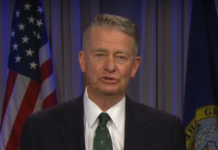